I have had a lot of time to think about, and unfortunately, a lot of experience to draw on when it comes to ‘invisible disabilities’.

I know the affect they can have on someone’s work life, social life… LIFE.

When I was 14, I went to a music festival with my family and a few friends. There was an attraction called ‘The Brain Machine’ with a guy outside the big tent calling people in. They didn’t ask me or my friends if we had epilepsy, or if there was a family history of it. They just sat us down on deck chairs with big glasses and headphones. The headphones played trance music stupidly loud, and the glasses flashed what I now know to be an illegal frequency of strobe lighting directly into our eyes. That was when I had my first seizure.

It hasn’t always been bad but it has never been completely controlled. I’ve got plenty of funny seizure stories; I once woke up with my friends mum, half naked, standing over me, I didn’t have a clue what was going on. Mid seizure, she ran to my aid when my friend called her, she had just got out of the shower!

I once woke up on a stranger’s shoulder on the tube, I had snuggled in thinking it was my other half, instead he was a very scared, broad, bald man who kindly let me ‘cwtch up’ until the paramedics arrived. He then had me scream in shock, in his face, when I realised he wasn’t my partner – poor bloke.

I try to laugh at as much of it as I can “it’s great exercise”, “I can break dance better than you” or my sign off and favourite “#Seizingtheday”.

I am more than happy for people to laugh with me, but not at me. I have had both, both in and outside of the work place. It’s not always funny and I can’t always see a humorous silver lining. 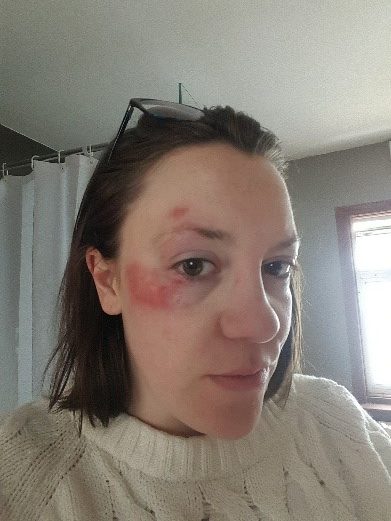 Me with a swollen, bruised grazed face. 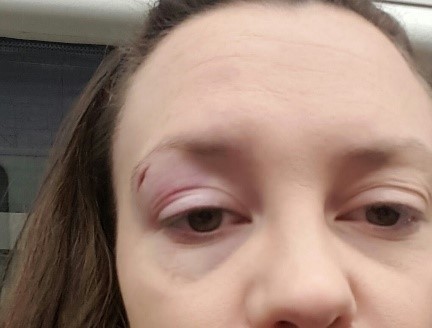 This HUGELY affected my confidence in my working and personal life, I’d say I’ve probably only just started clawing it back. In turn, of course, this had a massive effect on my career progression… or lack thereof!

Why am I telling you this?

Other than wanting to show you stunning pictures of myself.

Invisible disabilities and/or long term conditions aren’t always invisible, if I had a seizure, you’d see it, you might see someone with diabetes check their insulin, or see someone taking regular medication, but a lot are invisible; depression, bi polar disorder, PTSD/CPTSD to name a few.

If we can’t see them, maybe we can hear them – to do that we have to talk about them.

With that in mind, if you’re reading this and you have an invisible disability, and you’ve never felt able to tell your colleagues, I encourage you to do so. If you have a friend or colleague who has a disability or long-term condition, and you have always wanted to ask them something, ask, tell them I told you to!

That said, I’m not suggesting you start shouting from the roof tops if you don’t want to- equally I’m not suggesting friends and colleagues should push for answers if they’re not offered freely. But, if there’s something that’s been niggling you- maybe your boss has somehow missed the point, or the person on the desk opposite carries a portable strobe light for their bike then raise it- the point, not the light.

We can’t change ignorance, accidental or otherwise, without starting a few conversations – no matter how awkward they may be.

Unconscious bias is a hot topic at the moment, and I’ve been reflecting on how it has affected me. You’d think less as epilepsy isn’t visible in of itself, and I think I’d agree, mostly, but…

How many job adverts have you seen that say ‘Driver required’? Do they all need to be? I can’t drive – it’s really frowned upon to have a seizure behind the wheel. I can however, get a train or a bus- in fact, I get public transport either free or cheap #livingmybestlife #howjealousareyou.

So, I don’t apply for those jobs. I’d like to say their loss… which it absolutely is… but it’s also mine.

It is always a dilemma in my mind whether/when to tell employers about my epilepsy, this blog is a huge step for me, but I do have to tell them. In part for reasonable adjustments – small changes in the workplace, which can make a huge difference for someone living with a disability, invisible or not.

I won’t name names here, it’s far from the point, but one company I worked for said no to a filter screen on my computer- a small overlaying, grey coloured sheet that essentially dims the blue light from the screen (they cost around £40). I had a seizure in my office (my colleagues were great!), the next day I came in and like magic there was one on my desk.

I might get my foot in the door but twice I have told an employer (on zero hour contracts) that I have epilepsy, and there have suddenly been “no available hours” for me.

Working at Chwarae Teg is the first time I’ve worked in a flexible working environment. There are many types of Flexible Working; condensed or customised hours; job sharing; remote working.

Here at Chwarae Teg, we follow the Results Based Working model. This means we are all monitored on our objectives, achievements and results, NOT the hours we spend in the office.

I cannot tell you the difference this has made to my working life (I realise I’ve said that whilst telling you – it’s a figure of speech, not an absence, promise!).

From my point of view, if I wake up and can’t jump out of bed straight away, I can wait without worrying about the time. If I need to be sat in the dark to avoid a migraine, I can work from home (it beats wearing sunglasses in the office). If I have an outpatient’s appointment, I don’t have to worry about telling the world.

It took me a while to get my head around! But it’s changed my ability to do my job no end, immediately alieving the worry and hugely helping my epilepsy. Consequently I am now back on the career track I was on before I got really ill, as opposed to purposely avoiding anything demanding in case it effected my health.

From an employer’s point of view, they are getting the very best of me. I have been told so many times in previous employment to “take the day” when all I needed was an extra hour. Since being at Chwarae Teg I have not taken one sick day- I haven’t had to.

Why should we & how can we help?

Epilepsy affects 1 in 100 people in the UK, and 1 in 10 people will have a seizure within their lives (including absence and myoclonic jerks).

I know discussing these issues can be extremely daunting. For individuals and for businesses but help is at hand.

If you are a business and you want to check you’re on the right path or perhaps you feel you could do more but don’t know where to start, why not give us a call.

Our Business programmes can help indicate ‘where you are now’ and ‘how to move forward’ and we can offer a range of consultancy days covering topics from Unconscious bias to Flexible Working.

Please, individual or business, don’t hesitate to give me or my colleagues a shout if you have any questions, comments or would like to arrange a meeting.

Thank you for reading.