Figures released by the Office for National Statistics show that in some local authorities, the gap between women and men’s earnings as wide as 25.6%. However, the picture is mixed across Wales and despite the overall increase, 13 out of Wales’ 22 local authorities have seen a reduction in their gender pay gap.

The gender pay gap measures the difference in earnings of women and men across a whole area, highlighting what level and positions women are working in, and how this affects their income. This can help to reveal where there are barriers women experience in recruitment, retention and progression in work.

Wales is losing out on women’s skills and potential, and the economic benefits of gender equality which our own research shows could add up to £13.6 billion to the Welsh economy.

It is frustrating to see that the gender pay gap has widened in Wales this year, despite an overall decline in the UK. There have been positive commitments about gender equality, but now we need to see real action and a concerted effort to close the gender pay gap and reap the benefits of an equal Wales.

“Women are three times more likely to be working part-time than men, primarily due to them continuing to bear the brunt of caring responsibilities and therefore losing out on progression opportunities or roles in better-paid sectors due to the lack of flexibility.

“This is not just a problem for women. Wales is missing out on women’s potential to plug the skills gap in growing industries, and Chwarae Teg’s research shows that full gender equality could add £13.6 billion to the Welsh economy.

“A lot more needs to be done to combat the causes of the gender pay gap. We need to see childcare provision that supports women into work, parental leave policies that promote equal sharing of care, workplaces offering a variety of roles including senior positions on a part-time or flexible basis, and action to tackle stereotypes and ensure women are able to achieve their potential in all aspects of life.”

An important part of becoming a world leader for gender equality is being honest about how we are currently performing as a nation. How equal is Wales? This State of the Nation briefing seeks to answer this question, outlining how Wales performs in relation to key indicators for gender equality

State of the Nation - How equal is Wales?

The economic value of gender equality in Wales 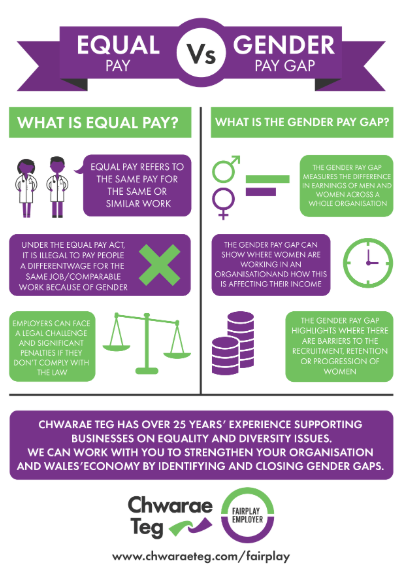 Keep up to date

Receive our quarterly newsletter and choose which updates to receive about our programs, events and research.